RINGO STARR,ADAM FAITH-SCOUSE THE MOUSE-1977-FIRST UK PRESS-POLYDOR - 2480429. Mega rare album was recorded for the movie. Scouse the Mouse (pronounced "Zee Scows mouse"; Rus. Scows Mouse) album, music for children, with the participation of Ringo Starr (as a vocalist) and other artists, released on 9 December 1977 in the UK by Polydor Records. Starr plays the role of the main character of the story, Scouse the Mouse, who emigrates from Liverpool to the United States. "Skaut" — the word for the nickname of the inhabitants of Liverpool in Britain, and Liverpool accent or dialect. Other main characters played by Adam faith (a journalist, actor and singer, repeatedly achieved success in the British charts 1960) ("Bonce the Mouse") and Barbara Dickson (Scottish singer) ("Jolly Molly"). The animated TV version of the story told in the album, it was planned to be shown on television network ITV, but the show was delayed due to a strike, and then was completely canceled. The album became the third and last edition of Starr on Polydor Records (in accordance with the prisoner between them the contract) in the U.S. were not released. As of 2012, the album was reprinted on CD-ROM. DEEP PURPLE-THE HOUSE OF BLUE LIGHT-1987-FIRST GERMANY PRESS-POLYDOR-831318-1. Rare American original iconic group. The House of Blue Light is the twelfth Studio album by British rock band Deep Purple and the second, recorded by the reunited "classic lineup" of the group, published in January 1987. In the Soviet Union was released by the record label "Melody" in 1988. The group gathered to record 12 APR 1986 in Massachusetts, USA, but has already finished recording in Vermont. According to Ritchie Blackmore, recording this album was a long and painful process, many tracks had to be rewritten. September 26, 1986 Roger Glover started mixing the album at Union Studios in Munich. It was assumed that all group members will be present at the same time, in order to make the last adjustments, however, the musicians appeared in the Studio, and left with it when they please: the contradiction between group members increased again, especially intense was the old conflict between Ritchie Blackmore and Ian Gillan. So out of all the members of the group only Gillan recorded several smaller parties. Had various disputes over the album, such as title (pace offered to call the album the title of one song — Black and White; also considered options such as The Acid Test, and It's Not That Bad!), songs (challenge the inclusion in the album of the song "Mitzi Dupree"). In connection with the complexities of entry and disputes a test version of the master disk appeared only on 18 December 1986, and, for example in the US, the album was planned (and announced) at the end of October of the same year. Accordingly, the release date of the album was postponed to January 12, 1987. ...more 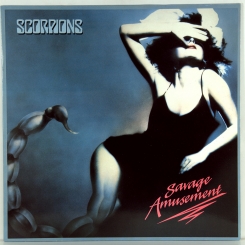 SCORPIONS-SAVAGE AMUSEMENT-1988-FIRST PRESS GERMANY-EMI - 1C064-7467041. Rare German original. Savage Amusement is the tenth Studio album by the German rock band Scorpions, released in 1988. This drive followed the successful Love at First Sting and differed musically from its predecessor. The album was the result of Scorpions experiments with popular music styles of the 80s — in the album there is the influence of disco, new wave and Synthpop. The album reached the maximum level of sales in the USA and it was rated platinum by the RIAA for selling over 1,000,000 copies in June 1988. ...more RAGE - REFLECTIONS OF A SHADOW-1990-FIRST GERMANY PRESS-NOISE-N 0160-1. Very rare original. Reflections of a Shadow is the fifth full-length album by the German heavy metal band Rage . It was released in 1990. Reflections Of A Shadow is interesting because the group invited guest keyboardist Ulli Kollner, thereby making the slope more melodic material. ...more